Easier to imagine the end of the world…

…than the end of capitalism.

This remark is often attributed to Fredric Jameson. The attribution is not entirely without reason as it is in Jameson’s oeuvre that the suggestion first* appears. In "Future City" in the New Left Review in 2003, the mot does not appear as an observation of Jameson’s own, however, but as the disavowed reported insight of "someone" whose identity has slipped Jameson's mind:

But cyberpunk is not really apocalyptic, and I think the better coordinate is Ballard, the Ballard of the multiple ‘end-of-the-worlds’, minus the Byronic melancholy and the rich orchestral pessimism and Weltschmerz.

For it is the end of the world that is in question here; and that could be exhilarating if apocalypse were the only way of imagining that world’s disappearance (whether we have to do here with the bang or the whimper is not the interesting question). It is the old world that deserves the bile and the satire, this new one is merely its own self-effacement, and its slippage into what Dick called kipple or gubble, what LeGuin once described as the buildings ‘melting. They were getting soggy and shaky, like jello left out in the sun. The corners had already run down the sides, leaving great creamy smears.’ Someone once said that it is easier to imagine the end of the world than to imagine the end of capitalism. We can now revise that and witness the attempt to imagine capitalism by way of imagining the end of the world.

Underlying the elaborate verbal structure of the late fiction are some fairly simple, in fact simple-minded, ideas about social reality. Indeed, the formal pyrotechnics disguise as much as they reveal of the ideational content. Clad in an elegant costume is the tired old idea that human nature is basically brutish and stupid, that people are inherently perverse, cruel, and self destructive, and that's why the modern world is going to hell. High-Rise, his latest novel, is virtually a parody of this notion. Such a vision, I believe, is merely a projection of Ballard's own class point of view, a myopia as misleading as the national and racial point of view in the earlier novels and intimately related to that narrow outlook.

The essay, much discussed at the time of its publication, concludes with a potent question that one must assume engraved it into Jameson's memory, though not so deep that a couple of decades couldn't obscure it:

Ballard's imagined world is reduced to the dimensions of that island created by intertwined expressways on which individuals in their cellular commodities hurtle to their destruction or that apartment complex in which the wealthy and professional classes degenerate into anarchic tribal warfare among themselves. And hence Ballard accurately, indeed magnificently, projects the doomed social structure in which he exists. What could Ballard create if he were able to envision the end of capitalism as not the end, but the beginning, of a human world?


One immediately notices how the revision accomplished by Jameson performs the same depoliticisation and idealisation of critical product that more deliberate misreadings and misrepresentations in the 80s and onward undertook in a more systematic way as a central part of the successful effort to eradicate Marxist practise and replace Marxism as a method of interpretation with the new post-structuralist flavours of liberalism/neo-liberalism. The transformation of H. Bruce Franklin’s Marxist analysis of the ideology of Ballard and his genre into Jameson’s vague quip in Hegelese regarding the disposition of some amorphous and unspecified Geist of the Zeit perfectly exemplifies the relentless, Orwellian cultural strategy which characterized the Reagan era’s political reaction in culture. 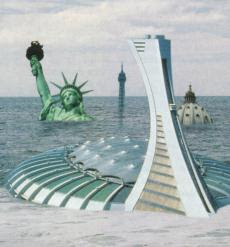 It’s not very surprising that this maximally vague observation that no one ever made, with its infantile solipsism resembling that of Ballard’s protagonists (while watching Independence Day , I of the imperial core petty bourgeoisie feel it is easier to imagine the end of the world than the end of capitalism, therefore it is easier for everyone) and its occlusions (of class, of property relations, of the non-homogeneity of the material situation of all humanity) which match that of his novels, should become so popular an adage, at the same time that it becomes common for self-described radical critics of mass and pop culture to cease to regard the objects of their study as concrete products produced in definite historical conditions and encrusted with meanings accessible to interpretation and attribute to them instead the status of miraculous messengers of encrypted eternal, universal truths.


*The origin of the quip seems to be as Zizek's misquotation, in the early 90s, of Jameson's '89 text.

Even after the ‘end of history’ there has seemed to persist some historical curiosity of a generally systemic – rather than merely anecdotal – kind: not merely to know what will happen next, but as a more general anxiety about the larger fate or destiny of our system or mode of production. On this, individual experience (of a postmodern kind) tells us that it must be eternal, while our intelligence suggests this feeling to be most improbable indeed, without coming up with plausible scenarios as to its disintegration or replacement. It seems easier for us today to imagine the thoroughgoing deterioration of the earth and of nature than the breakdown of late capitalism; and perhaps that is due to some weakness in our imaginations.

I have come to think the word 'postmodern' ought to be reserved for thoughts of this kind.

The portrait of cultural and ideological 'postmodernity' is elaborated further on:

What we now begin to feel, therefore – and what begins to emerge as some deeper and more fundamental constitution of postmodernity itself, at least in its temporal dimension – is henceforth, where everything now submits to the perpetual change of fashion and media image, that nothing can change any longer. This is the sense of the revival of that ‘end of history’ Alexandre Kojève thought he could find in Hegel and Marx, and which he took to mean some ultimate achievement of democratic equality (and the value equivalence of individual economic and juridical subjects) in both American capitalism and Soviet communism, only later identifying a significant variant of it in what he called Japanese 'snobisme', but that we can today identify as postmodernity itself (the free play of masks and roles without content or substance). In another sense, of course, this is simply the old ‘end of ideology’ with a vengeance, and cynically plays on the waning of collective hope in a particularly conservative market climate. But the end of history is also the final form of the temporal paradoxes we have tried to dramatize here; namely that a rhetoric of absolute change (or ‘permanent revolution’ in some trendy and meretricious new sense) is, for the postmodern, no more satisfactory (but not less so) than the language of absolute identity and unchanging standardization cooked up by the great corporations, whose concept of innovation is best illustrated by the neologism and the logo and their equivalents in the real of built space, ‘lifestyle’ corporate culture and psychic programming.


Zizek (perhaps while drunk) took this to be nothing but "the old 'end of ideology'" rehashed (and endorsed the sentiment):

...as Fredric Jameson perspicaciously remarked, nobody seriously considers possible alternatives to capitalism any longer, whereas popular imagination is persecuted by the visions of the forthcoming ‘breakdown of nature’, of the stoppage of all life on earth – it seems easier to imagine the ‘end of the world’ than a far more modest change in the mode of production, as if liberal capitalism is the ‘real’ that will somehow survive even under conditions of a global ecological catastrophe.